Promote Your Page Too

Old man's gland - Do dogs have the same problems as humans? 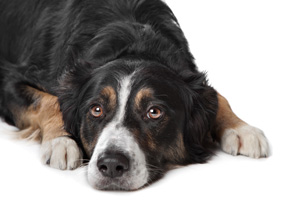 The prostate is the only accessory sex gland in the male dog. It is a butterfly shaped structure that surrounds the urethra (the tube that connects the bladder to the outside). Due to the location of the prostate, it can affect the urinary system, the colon and the hind legs, as well as having some systemic effects. Prostatic fluid is produced continuously in the dog. Prostatic fluid makes up most of the volume of seminal fluid (the fluid that carries semen). The prostate has many nerves and blood vessels running to it but is surrounded by a thick capsule, which sometimes makes it difficult for some drugs to get deep down into the prostate. Normal prostatic function is dependent on circulating testosterone. The prostate can develop a few conditions that can result in debilitating disease in the dog.

Most dogs with prostatic disease are middle aged to older intact males, as testosterone plays an important role in the function and size of the prostate. Neutered dogs are at a reduced risk but some prostatic diseases can still develop. The clinical signs that you may see at home can be divided into four different categories.

If any of these signs are noted in a dog, it is important to bring him to the vet where a proper clinical examination and work up can be done to diagnose the problem. A rectal exam is usually helpful in diagnosing an enlarged prostate but it is sometimes very difficult to feel, particularly in large breed dogs. X-rays will also form part of the work up as an enlarged prostate can usually be seen on X-rays. The vet may then suggest an ultrasound from the tummy’s side where the prostate can be seen and its size and shape assessed. Some animals may require further testing such as biopsies (a surgical procedure where a small part of the prostate tissue is removed and sent off to a specialist pathologist vet for microscopic examination) or even surgery to differentiate between different conditions.

Prostatitis refers to inflammation, usually due to infection, of the prostate. It can affect any age or breed of dog. It can occur with or without enlargement of the prostate. Acute prostatitis is often associated with systemic illness and is more commonly seen in younger males. They may present with a very painful abdomen as well as fever and loss of appetite (anorexia). These animals may need hospitalisation and intensive treatment such as being placed on a drip, catheterisation where a special tube is inserted from outside through the penis into the bladder, and intravenous antibiotics. Chronic prostatitis has a more prolonged clinical course and is often not associated with systemic illness.  Both forms of the disease require a long course of antibiotic treatment, often four to six weeks and it is important that the choice of antibiotic is based on a culture of the urine or prostatic fluid. A culture is where a small sample of fluid is collected with a technique which is done as sterile as possible and sent off to a laboratory for tests to see exactly which bacteria or other micro-organisms may be causing the trouble. Castration, where the testicles are removed, should always be considered as it reduces testosterone which contributes to the condition and complications seen.

Prostatomegaly due to benign prostatic hyperplasia

Prostatic (within the prostatic) and paraprostatic (next to the prostate) cysts are common causes of prostate enlargement. Medical treatment is generally ineffective. Castration is recommended but surgery is usually required to reduce the cysts. It is a very specialised procedure.

Unfortunately castration does not protect against dogs developing prostatic cancer. The signs displayed will be similar to most other prostatic diseases. A definitive diagnosis can only be made on biopsy of the prostate. There is a high rate of spread in prostate cancer and the hind legs and lungs are often affected. Surgery can be done but is difficult and has many complications. Often, supportive care is provided but unfortunately the prognosis is very poor.

In humans smart robotic surgery like the Da Vinci Surgical System have been used for removing the prostate in recent times. This surgery is less invasive than the conventional method of having to go through the abdomen. Unfortunately the cost of the equipment is prohibitive for the veterinary environment under normal circumstances. Fortunately full surgical removal of the prostate is a rare occurrence in veterinary medicine and the vet will be able to advise you which course of action would be the best, should you ever have to face this scenario.

There are many different causes of prostatic disease in dogs. It is important to be able to recognise signs of disease in your dog and further investigation is usually required. Castration remains an important control measure in prostatic enlargement but unfortunately does not completely take away the risk for the development of prostatic cancer.